You are here
Home > Musings > Rivers in the Sky!

Something I've been reading up on over the last few days is the phenomena of atmospheric rivers, and I thought you might be interested in them too.

Rivers don’t just occur over land, they can be found in the atmosphere too. Just as you might imagine a river over the surface of the earth, atmospheric rivers ‘flow’ through the air above our heads.

It’s a feature we particularly look for through the winter months, although they can occur at anytime of the year. Atmospheric rivers are narrow bands of water vapour at high .evels in the troposphere which can extend many hundreds and even thousands of miles (usually) across an ocean.

It is estimated that atmospheric rivers are responsible for around 90% of the north-south transport of water vapour, even though the features cover less than 10% of the earths surface. They are a vital component of the global water cycle.

But, as is so often the case with earth science (i.e volcanoes), as well as being vital for life they can destroy it too. Atmospheric rivers can cause severe flooding across mid-latitudes, including over western Europe. Persistent wet spells of weather in the UK are frequently caused by such events, although the absence of them can lead to drought.

Forecasting such weather features is actually fairly straightforward as they will occur alongside a strong jet stream. The amount of rainfall which can occur in such conveyor belts of water in the sky is trickier to forecast. Daily totals of rainfall are hard to forecast even when the rivers aren’t overhead; it’s down to models to suggest where the heavens will open, and where they will not.

A recent estimation is that atmospheric rivers cause around £1.1 billion of damage annually around the world. 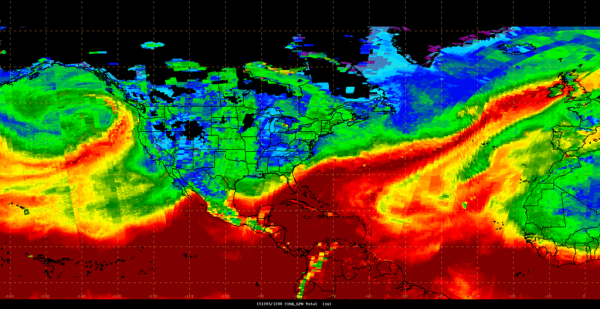