You are here
Home > Garry > Temperature contrasts and heavy bursts

A complex series of fronts covered the British Isles today, with one frontal zone affecting the south, whilst another was positioned over northern England.

The latter of these systems had a much more marked contrast in temperature across it, from 13C in Yorkshire at midday, to 6C in central Scotland.

Colder air at upper levels was also moving into the region, contrasting with mild, moisture laden air at lower levels.

This created instability within the middle layers of the atmosphere, and as cooler air advanced in, instability increased at mid and lower levels.

The result was some very heavy and squally bursts of rain across northern England, shown streaking eastwards as pulses of showers on the radar. 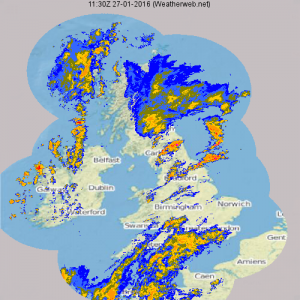