You are here
Home > Month Ahead > July 2016 – Preliminary Forecast

+++ FOR PRIVATE CLIENTS ONLY...NOT TO BE REDISTRIBUTED...PLEASE DO NOT FORWARD THIS EMAIL WITHOUT PRIOR PERMISSION +++

*** Long range forecasts can, and do change frequently. The forecast below is for guidance only ***

OVERVIEW
Sea surface temperature changes are again playing a major role in influencing summer conditions in the northern hemisphere.
The Pacific Ocean has now slipped into La Nina (colder) conditions, although the Indian Ocean remains warm.
Sea temperatures around the UK coasts have change significantly in the past month and are now showing warmer than average temperates around UK and Ireland shores, most notably around Ireland and extending over much of western European seaboard. This increased water temperature could lend itself to enhanced convection in these areas.
The cold 'blob' remains in the mid Atlantic area, this leading to an increased chance of anticylonic behaviour in this area, again favouring lower pressure developments closer to the UK.

BREAKDOWN
1st to 7th
Thundery showers during this period in eastern and southern England and Scotland. It may be warm or even very warm.
However, a sign of things to come is west of Ireland where a trough is likely to be bringing some rain, possibly heavy and then edging eastwards through the rest of Ireland and the UK during the week.
The progress east may be somewhat erratic, but it is expected. Turning cooler as the more unsettled weather arrives.

8th to 14th
More unsettled conditions for all in this period. Low pressure may well be in control bringing a mostly northwest flow. Rain or showers seem likely and these will be heavy at times. Areas exposed to the wind are at most risk of the rain and showers.

15th to 21st
We are expecting this week to be remaining rather mixed. Lower pressure again bringing some periods of rain or showers, and we suspect that it is going to be feeling rather cool. The low generally east of the UK. The best of any dry weather in mor southern areas.

22nd to 31st
Despite lower confidence the current ideas are for an improvement in conditions towards the end of the month.
It could be that a ridge of high pressure builds, bringing a warmer southwest flow, although the risk of some thunderstorms once again.

CONFIDENCE
Moderate to high in the ideas of a more mixed or unsettled month, and moderate in the early detail. Lower confidence in the improvement later in the month. 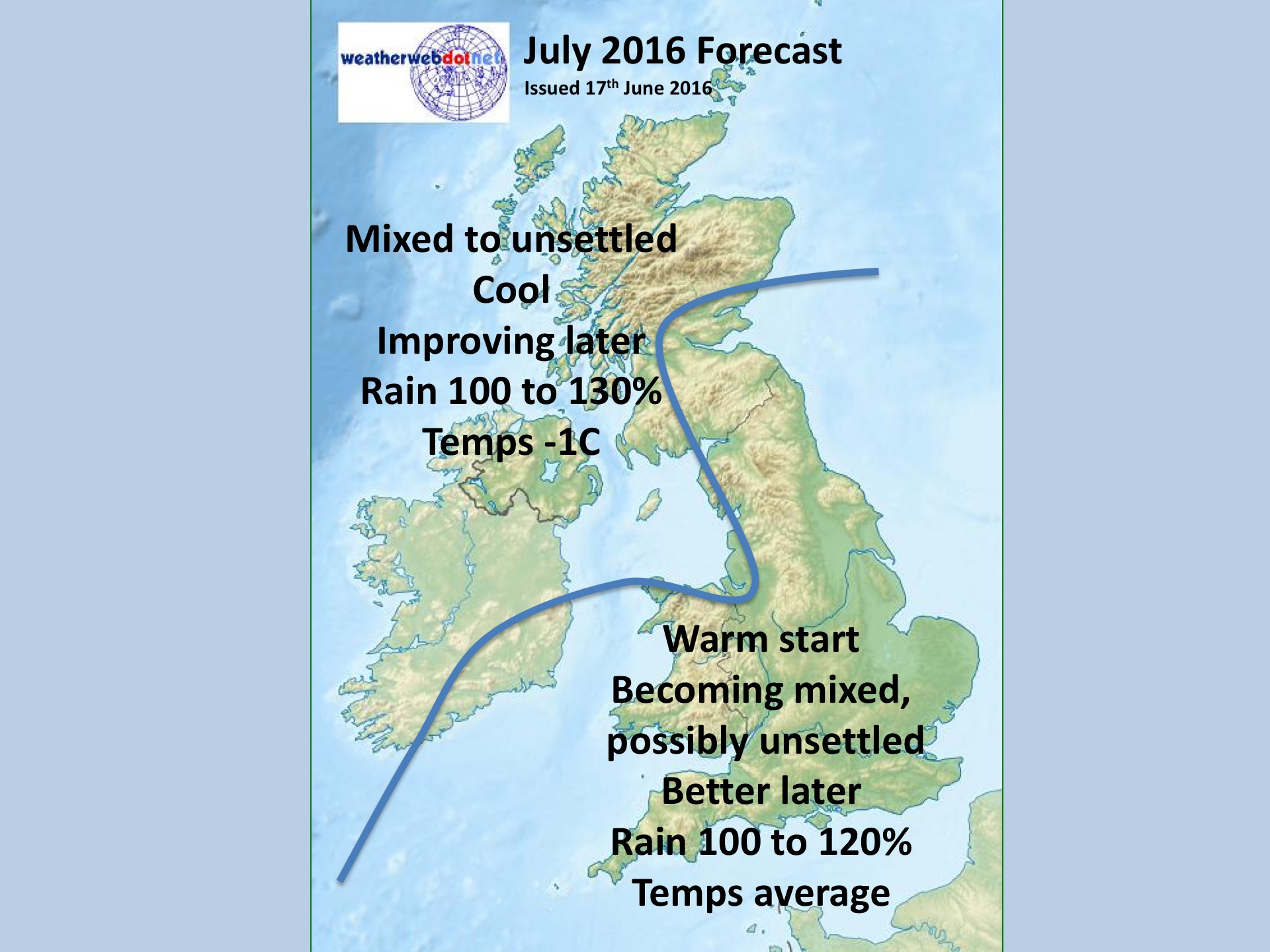