A comparison of my analogue prediction for October and the observed 500mb anomaly.

See also previous moon-related musing via the lunar sub-tab at the top of this page, including previous monthly predictions and reviews.

Below (left) is the actual 500mb anomaly for October 2016, and (right) the prediction made using my lunar analogue research method.

As discussed before, this is more about testing a theory than making a forecast. The scale is the same for both charts - the individual year of 2016 would naturally be expected to show more pronounced anomalies than the set of years used to create the analogue chart. 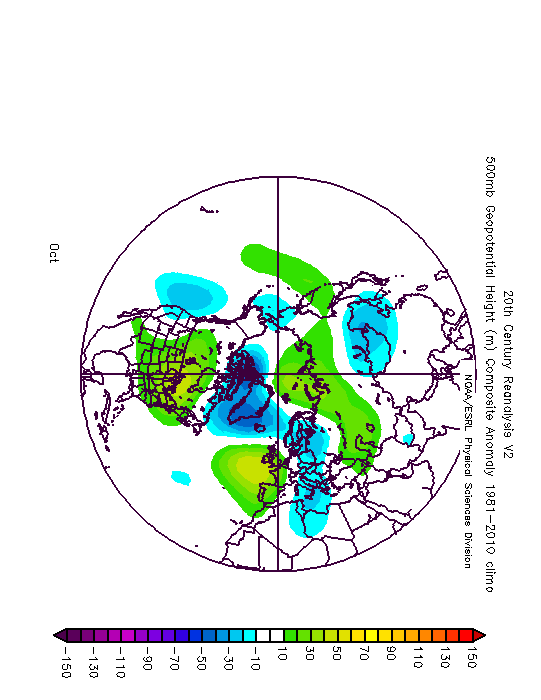 Before reviewing the results, the most striking feature to note from October 2016 was the extent of the higher than normal 500mb heights which dominated northern latitudes around Scandinavia and northern Russia. This is not a surprising result, given the persistent easterly blocking set-up we have seen in recent weeks, but is fascinating to see it confirmed in this monthly map.

So was the prediction any good? Well, the analogue hinted at above normal heights over northern Russia, but was well short of the reality. I can't say the predicted height fields around Europe showed much resemblance to the actual set-up. It favoured higher pressure near the British Isles, so the idea of a more settled, drier month was a fair result, but the major blocking and easterly component was not predicted.

Meanwhile, the pattern across North America was more accurate, with lower pressure around the west coast of the USA, and generally above average pressure elsewhere across the States and Canada. Lower than average pressure near and west of Greenland was a fair result, although this certainly didn't extend across to Iceland.

Overall, some hits and misses across the northern hemisphere weather patterns during last month. One question which arises is just how unusual was the extent of the blocking seen? Have many years in the recent past seen an anomaly chart like this in October? That's a story for another musing another day...!

For the record, below is my predicted 500mb anomaly for November.

This pattern would put high pressure commonly south & south-west of Britain, and low pressure over Scandinavia and eastern Europe. Blocking over northern Russia would remain likely. Meanwhile, a marked below normal pressure set-up would dominate the north Pacific, whilst ridging would affect the western USA, and troughing toward the eastern seaboard.

Let's see what happens, and I'll review it next month! 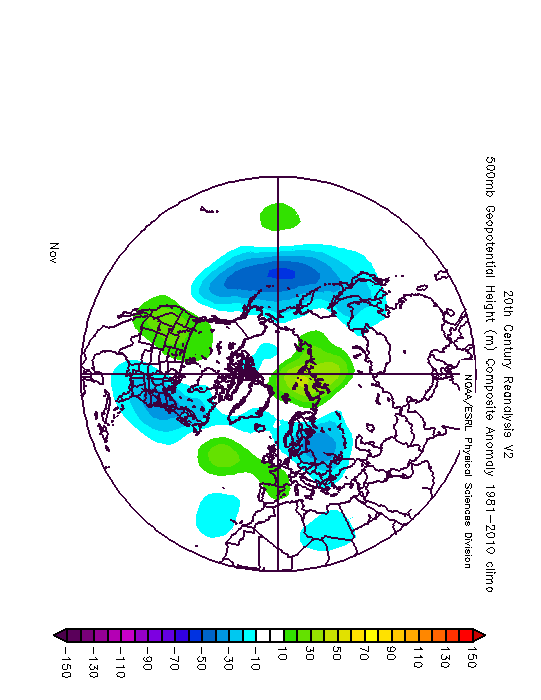