You are here
Home > Musings > Climate change and the UKCP18 report, the facts

There were a few comments by email asking about the report and a poster made a comment about how "climate change is a political campaign".

You'll know that I'm a bit of a fence sitter in the whole human-induced climate change debate (what used to be called AGW, anthropogenic global warming). It's the data that formulates my opinion on the subject, and this may change day to day.

As of now I am more in the climate change camp and think that the risk of doing nothing greatly outweighs the risk of waiting to see what happens.

That's not to say I think the science being undertaken in climate change research is all good. There are many questions about funding and the 'the debate is settled, climate change is happening, move on" approach.

And so I thought it might be helpful to post here my response to  the "political campaign" comment, also penned on Facebook. Note, this is not to disparage the poster, or to look for argument, but I think that we should be stating climate change as it is so that everyone can make an informed choice.

" A cooling trend is observed when the sun approaches its quietest period in the solar cycle. Most climate scientists would state that this effect will mitigate some of the warming global temperatures we have seen in recent decades.

That the global climate has warmed is recent decades there is no doubt (chart below shows temperatures from 1875 to 2017 relative to the 1902-2000 average - not this is a non-standard climatological period).

The cause of the warming is attributed by a majority of scientists to human emitted CO2 and other greenhouse gases.
CO2 has also increased in recent decades, again there is no doubt that this has been the case. 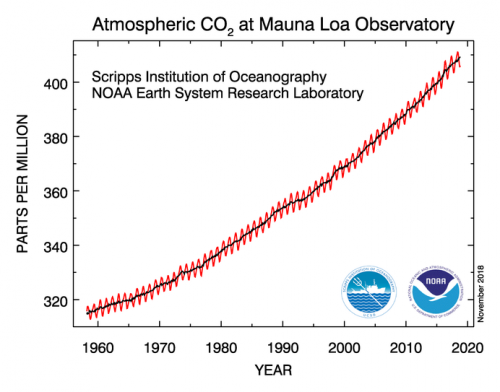 A minority of climate scientists (according to UN IPCC reports) argue that CO2 is not the cause of warming and that warming temperatures globally are part of a natural climate trend.
The decision for the public and politicians is how to approach this debate. The options are do nothing and hope that the warming is natural, but mitigate against any changes a warming world may bring to modern society, or take action to drastically reduce greenhouse gas emissions just in case the computer modelling is correct.
If the models are correct the consequences of not taking action and allowing warming to continue at the current pace may be drastic. "
Share this story on social media:
Share on Facebook Share
Share on TwitterTweet
Share on Google Plus Share
Share on Pinterest Share
Share on LinkedIn Share
Share on Digg Share
Send email Mail